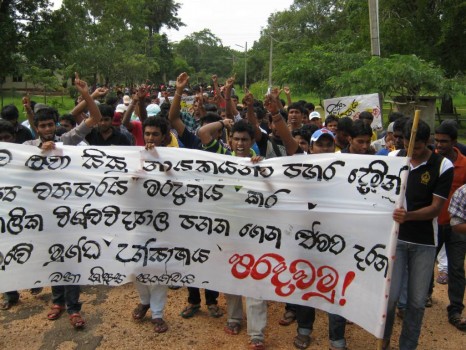 Inter University Students Union (IUSF) to held a protest march today 11 am (March 6) from Kelaniya University to Kiribathgoda Town over Hostel issues faced by students.Parents of the students will also support for this rally.

A group of female students of the Kelaniya university have occupied a canteen area of the university due to an issue pertaining to their hostels. The students note that they were forced to resort to this measure as authorities who identified their issue are yet to find a solution to it.

Around 300 students are currently housed in these premises.

The Students’ Union of the university charges that around 800 students were denied hostel privileges this year.

Chairman of Kelaniya University Students Union, Kingsley Gunaratne said: ” In 2010 they wanted to suppress the students so they implemented a change in hostels. This resulted in about 800 students losing hostel privileges…”

However, responding to a query raised in Parliament on Tuesday Minister of Higher Education , S.B. Dissanayake notes that universities have only spent less than 50% of the funds allocated to their ministry.
He made following comment: “.. There is no issue about funding. What we are trying to do is to keep our expenses below 70% of the allocated funds. in 2010 a majority of the universities spent less than 50% of their allocated funds.
Source - Newsfirst
LankaUniversity-News.com Sri Lanka University News at 9:58 AM No comments:

Sources close to the Inter University Students' Federation (IUSF) of Sri Lanka says that the Marxist party Janatha Vimukthi Peramuna (JVP) under its new leader Anura Kumara Dissanayaka has intensified the effort to win back the leadership of the IUSF to the party.

IUSF is not a legal body in the university system but it is recognized for decades as the radical students' movement of the country.

JVP was in the helm of the IUSF until the party split in 2011.

IUSF sources say that JVP had recently failed an effort to buy or oust the IUSF leader Najith Indika.
www.lankauniversity-news.com
LankaUniversity-News.com Sri Lanka University News at 9:53 AM No comments: