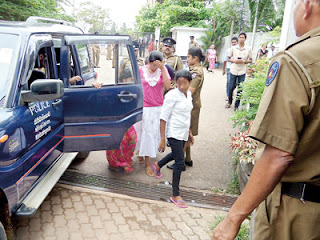 Sri Lankan universities have decided to take stern action against Ragging and violence after a freshman female student of Kelaniya University was ragged by a group of senior students.

Vice Chancellor of the Kelaniya University, Professor Sunanda Madduma Bandara said all the universities in the country will fully implement the Charter signed by the Commonwealth University Union and the University Grants Commission to eliminate ragging and violence against women from the 12th of this month.
Ten undergraduates of Kelaniya University allegedly involved in ragging a female fresher are to be charged under the Anti Ragging Act for which tough penalties could be imposed, police said.

Officer-in-Charge of Kiribathgoda Police, Chief Inspector (CI) S.K. Meeallage said police had acted after the student complained to them of being assaulted and verbally abused for wearing Denim jeans to university.

CI Meeallage told that according to the complaint, the fresher had been told to remove her Denim jeans in public. Thereafter, abusive language was used on her and one of them had slapped her hard, causing her to strike her head against a wall.

“Seven suspects were arrested with the assistance of other police stations in various parts of the country  where they were residing. They were remanded till May 17 after being produced in the Mahara Magistrate courts,” he said.

He said that, among those arrested are two first-year undergraduates who allegedly told the victim to withdraw her compliant. However, the possibility that these two undergraduates were forced to threaten the victim has not been ruled out.    “Police and the university will provide special security for the fresher who complained. We intend to offer her a safe house and security outdoors. The university will be requested to provide her security within the campus,” he said.   A search for three other suspects is in progress. They are from Negombo, Gokerella and Ibbagamuwa.

Under the Anti Ragging Act, sexual harassment or causing grievous hurt to a student or member of the staff in Educational Institutions is a non-bailable offence, for which bail should be obtained from a High Court.

If found guilty, they are liable to imprisonment for a term not exceeding 10 years, and could also be ordered to pay compensation of an amount determined by court.

Kelaniya University Vice Chancellor (VC) Prof Sunanda Maddumabandara said that, this time they allowed the girl to file a police complaint before an internal investigation.    “We are taking disciplinary action against the suspected students while ensuring the safety of the victimised girl”, he said.

“Ragging is a menace that affects university activities. To date, eight students have left our university this year for ragging. There could be more planning to leave or have already left without giving notice,” he said.

He said that most students are experiencing stress and are mentally depressed, while some commit harm to themselves due to this.

He said the University academic staff too stood with her against ragging within the university.

Prof Halpita condemned the actions of the group of students who verbally and physically attack university students.

The University Grants Commission recently decided to initiate tough action to prevent ragging. Among the measures were to implement the anti-ragging act with tough penalties including expulsion.    The Anti-Ragging Act introduced in 1998 has so far not been strictly enforced.

Meanwhile Sri Lanka's Marxist party, Janatha Vimukthi Peramuna affiliated student union IUSF “Anthare” says ragging has become a subculture and it is not only in universities it exists.

The student union leader charged that there is a movement to suppress the students behind the arrest of students alleged of ragging.