The Re Correction Results (Re-scrutiny Results) of G.C.E. Ordinary Level O/L Examination 2014 released to the internet.

Candidates can check their exam results through http://www.doenets.lk/exam/


2014 O/L Re correction Results Released to www.doenets.lk and www.exams.gov.lk website. 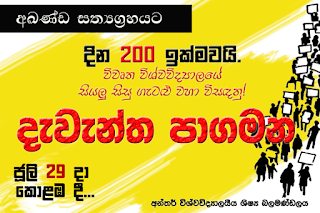 
At the moment Open University students are engaging a Sathyagraha campaign over 225 days.

The Protest Rally will start from Open University, Nawala at 1pm and will lead to Colombo Fort or UGC, Ward Place Najith further said.

There will be a heavy traffic along the main roads and other bi- roads in Colombo.

www.lankauniversity-news.com
LankaUniversity-News.com Sri Lanka University News at 6:47 AM No comments: