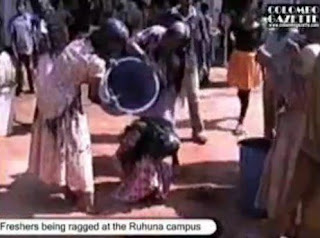 Sabaragamuwa University student commits suicide due to Campus Ragging
A female student of the Sabaragamuwa University committed suicide by hanging at her home in Mabulgoda, Kottawa. The student in a suicide note has cited her inability to cope with inhuman ragging at the hands of seniors as the reason for her decision to end her life.
The deceased student, 24 year old S.Hewage Amali Chathurika studying in the Faculty of Applied Sciences has stressed that no university student should attend her funeral.
"My daughter was past student of Devi Balika Maha Vidyalaya, Colombo, Chathurika and gained admission to the Sabaragamuwa University on March 23, 2013," her grieving Mother Wasantha Elvitigala said. Chathurika's mother says her daughter was subjected to severe ragging and as a result had suffered a mental breakdown for which the family had even consulted a psychiatrist.
According to the mother,Chathurika had consulted a phychiatrist who had advised long term intervention for the illness. However, Mrs. Elvitigala says her daughter had been continuously harrassed by senior students even after she had returned to the university.
Chathurika's mother said her daughter had attempted suicide on a previous occasion by taking a drug overdose and was scared to attend the university.
Mrs.Elvitigala who is working at a private hospital had gone for work as usual on that fateful day. However,as her repeated calls had not been answered by the daughter, she (Mrs.Elvitigala) had then called her brothers wife living nearby and told her to go to her home and tell her daughter to answer the phone.
However, a few minutes later Mrs.Elvitigala had got the dreaded phone call from her sister-in-law asking her to return home immediately as there was some trouble at home.
According to the mother, her daughter has also requested in her note that any property that she owns be donated it to the Maharagama Cancer Hospital.
The doctor who performed the postmortem on the university student has confirmed that the victim committed suicide by hanging herself. Police are conducting further investigations.
source - Daily News