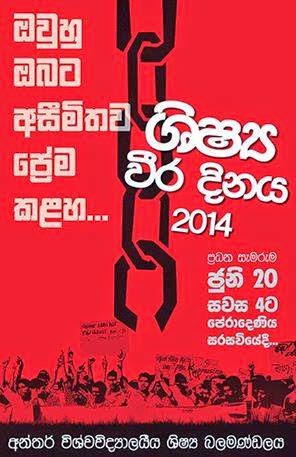 Today (20th June)  is the National Student Heroes Day’ that commemorates student comrades who sacrificed their lives on behalf of the Motherland and free education. Shooting dead comrade Weerasuriya on 12th November, 1976 at Peradeniya University was the first student life taken by capitalist governments in Sri Lanka. Since then this repression has been continuing and the latest is the brutal killing by the police of Comrade Susanthe Bandara at Ruhuna University in July, 2010.

The history of the student movement in Sri Lanka is the history of the struggle for the independence of the Motherland and for free education. In this struggle 20th June is a very special day. For the first time in the world a police station was established in a university and in the struggle against the UNP repression Comrade Padmasiri Abeysekera was murdered on 19th June, 1984. In a police shooting at a student agitation held in Colombo University protesting against this murder Comrade Rohana Ratnayake was killed on 21st June1984. Also, Comrade Nishanthe Jayawardene of Vijithe MMV, Dickwella was shot dead within the school premises on 20th June, 1988. June 20th is declared the ‘National Student Heroes Day’ basing on these incidents. 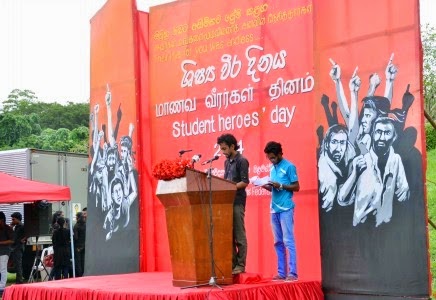 Most of student murders in Sri Lanka took place during the latter years of the 80s. This was when student movement in Sri Lanka was fighting against privatization of education, Indian expansionism as well as dictatorship and undemocratic nature of J.R. Jayawardene. Even today the same process of undemocratic moves, attempt to privatize education and cowing down to imperialism and regional hegemony is taking place under different administrations and persons. The symbol of destruction of free education then was the Colombo North medical school that was launched with the courtesy of the UNP government. Today Malabe medical school is being implemented with the full support of the Alliance government. Then our Motherland was swallowed up by Indian expansionism through Indo-Lanka pact and IPKF. Today our country is being gobbled by the US imperialism through ACSA agreement, the IMF and World Bank and Indian expansionism through, with or without, SAFTA and SARTIS agreements. Then J.R. Jayawardene’s constitutional dictatorship destroyed democracy in the country deploying official and unofficial armed gangs. Today democracy is being destroyed adding family dictatorship to the constitutional dictatorship of JR and also with official and unofficial armed gangs.

The challenge before the student movement today is not a trivial affair. What has emerged is not an opportunity to waste the strength and energy of the student movement on a few traditional isolated struggles. It is a moment to gather all forces to deal a vital blow on the undemocratic, despotic and repressive government. For this Socialist Students Union emphasizes that more and more students should rally around a reliable, correct and courageous leadership. We could perpetually honour our fallen comrades only if we bring victory to the social and political vision they showed us and for which they made the supreme sacrifice.”
Source – IUSF Web and LankaTruth
Photo -IUSF
www.lankauniversity-news.com
LankaUniversity-News.com Sri Lanka University News at 9:10 PM No comments: 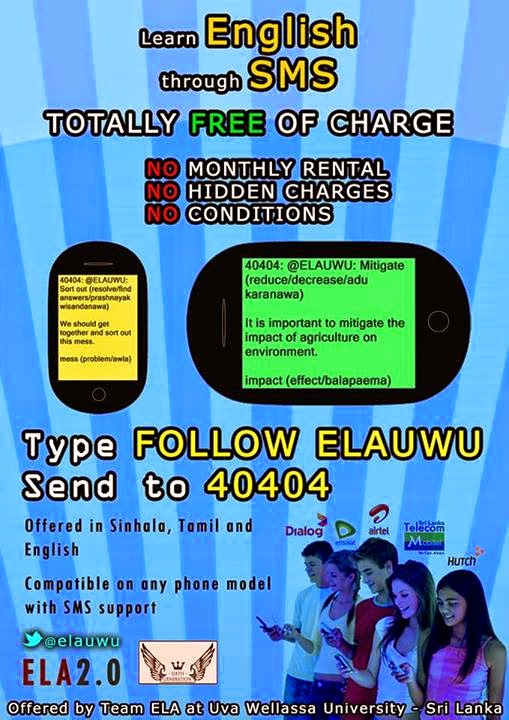 "Team ELA" at Uva Wellassa  University has launched a Creative Project aiming improve University students English Knowledge.
This English Tips service will be a free service and you can get Daily English Lessons to your mobile.

To activate
Type FOLLOW<space>ELAUWU
Send to 40404

ELA Free English Tips service is offered totally free of charge via Twitter. This is an initiative taken by Team ELA at Uva Wellassa University to disseminate English knowledge to the needy at no cost. This is the first of its kind service offered in Sri Lanka free of charge. 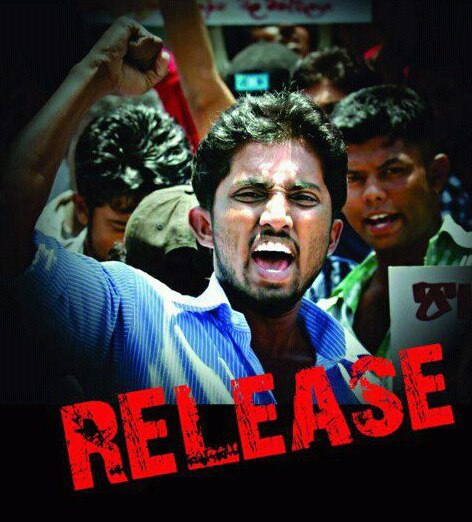