LankaUniversity-News.com Sri Lanka University News at 10:21 AM No comments:

The aim of the UNIVOTEC is to provide progressive upward movement to the Sri Lankan students in the technical education and vocational training system, based on their aptitudes and abilities, to acquire university education.
The mission of the University of Vocational Technology is
·        to provide services in human resources, curriculum,learning resources development, research and consultancy
·        to achieve professional excellence with ethical rectitude and


·        to liaise with global TVET sector, academic community and Industry 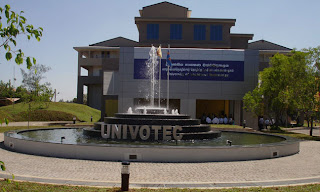 Sri Lanka's Ministry of Youth Affairs and Skills Development plans to set up 13 University Colleges island wide to create alternate learning pathways up to the degree level for students who are leaving formal education.

The government will set up 4 university colleges by upgrading the existing training centers falling under the purview of the Ministry.

In addition to the above, 09 University Colleges are to be constructed in Ratmalana, Kuliyapitiya, Thalalla, Baddegama, Katunayake, Anuradhapura, Borella, Katubedda and Jaffna. A total sum of Rs .3173 million has been allocated for the purpose in 2013.

The proposal made by Hon. Dallas Alahapperuma, Minister of Youth Affairs and Skills Development to proceed with the activities relating to the construction work of the 09 University Colleges subject to the stipulations made by the General Treasury, was approved by the Cabinet. 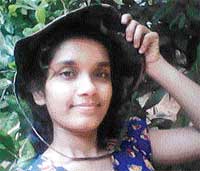 A student in the Law Faculty of Colombo University in Sri Lanka who was being treated for dengue at the Colombo National Hospital, has died, the hospital sources stated.
The student S J Nisansala Priyanthi Samarasinghe was admitted to hospital last Thursday (May 30).
The University administration Tuesday decided to temporarily close three faculties and suspend the educational activities of Law, Art and Management faculties until Monday.
Health Authorities of the Colombo Municipal Council has found dengue larvae in the water samples collected from the Law Faculty building and alerted the University to close the premises. The University administration has decided to close the other two faculties situated adjacent to the Law faculty.
Health authorities have also closed 12 government schools due to dengue threat and clean-up programs are in progress in those schools. 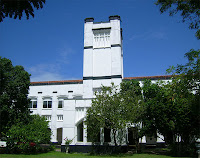 The Public Health Department, of the Colombo Municipal Council (PHD CMC), yesterday urged the Vice Chancellor of the Colombo University to temporarily close the faculties of Law and Management and clean up all mosquito breeding places there.
Chief of the PHDCMC said that there had been several dengue cases reported from the two faculties which had prompted the PHD to carry out inspections.
Last week the council fumigated the whole area where the two faculties were situated and inspections were carried out yesterday morning. The PHD Chief said that there had been several places where his teams had found mosquito larvae.
Dr. Kariyawasam said he had written to the VC and asked him to temporarily close the two faculties and carry out cleaning campaigns to prevent more students from being infected.
The number of dengue cases in the city from January to the beginning of June had increased to 1,237 while three deaths were reported within the period. 1,011 dengue cases were reported within the first five months of last year. Extract From ISLAND 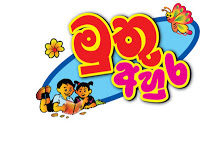 The Muthu Ahura paper series commenced publishing in 2013 under the guidance of Lake House Chairman Bandula Padmakumara.
The paper is written as a tabloid, with photographs & drawings printed both in color and black and white. Monthly printings include the activities, drawings, poems, stories, competitions, model papers and lessons for Grade 1,2,3 & 4 students.

The readership is above one million and School Delivery and Paper Subscriptions are doing by Dinesh De Alwis. Muthu Ahura is distributed to every corner of the island by Lake House Circulation Department headed by Sunil Sendanayake.

The Grade 5 / Year Five Scholarship Exam Paper 2013 will be issued with Vidunena Education paper after getting approval from Education Ministry. The 2013 Exam paper releasing date will be notice soon.

Vidunena Education Paper for Grade/Year 5 Scholarship Examination is a Sinhala language education paper target for Grade 4 & 5 students in Sri Lanka. It is published by the Associated Newspapers of Ceylon Limited (Lake House), a government-owned corporation. The newspaper commenced publishing in 2011 under the guidance of Lake House Chairman Bandula Padmakumara.

The Year 5 Scholarship examination is a very competitive examination in Sri Lanka. Nearly 300,000 students sit for the Examination annually. This examination is considered as the  Parent’s exam. This paper has recommended by former Examination Commisioner Anura Edirisinghe.
The paper is written as a tabloid, with photographs printed both in color and black and white. Weekly printings include the model papers and lessons for Grade 4 and 5 students. The current editor-in-chief of the paper is Hemali Wijerathne and the Circulation section is headed by Sunil Sendanayake. The paper is distributed to the schools network island wide under supervision of  Dinesh De Alwis.

Sithmina Education Paper is a Sinhala language paper target for Ordinary Level (O/L) students in Sri Lanka. This is the only Education paper which publishes weekly according to the O/L Syllabus. It is published by the Lake House, a government-owned corporation.

The newspaper commenced publishing in 2012 under the guidance of Lake House Chairman Bandula Padmakumara. The readership is around 200,000 and the circulation is 80,000.


The paper is written as a tabloid, with photographs printed both in color and black and white. Weekly printings include the model papers and lessons for Grade 10 and 11 students. The current editor-in-chief of the paper is Manoli Subasinghe. School Distribution system and Paper Subscription is handled by Dinesh De Alwis.

The current editor-in-chief of the paper is Anoma Gangoda while Gunapala Jayalath is the sub editor. The circulation is close to 100,000 and Pre School Delivery and Paper Subscriptions are doing by Dinesh De Alwis. Athuru Mithuru is distributed to every corner of the island by Lake House Circulation Department headed by Sunil Sendanayake.

Administrative Board of Sabaragamuwa University has suspended 47 students who allegedly involved in a clash with the police last Saturday.

However addressing a media briefing held in Colombo today, Convener of the Inter University Students Federation Sanjeeva Bandara said that the students were suspended on the orders of the Higher Education Minister.

The police arrested 10 students on Saturday when they clashed with the police during a protest staged by the students of the University demanding the University authorities to stop the expulsion of four students.


Police were forced to fire tear gas to disperse the students protesting in front of the Sabaragamuwa University and blocking the main Colombo-Badulla highway. The students have also attacked the police injuring 10 police officers.
www.lankauniversity-news.com
LankaUniversity-News.com Sri Lanka University News at 10:31 PM No comments: 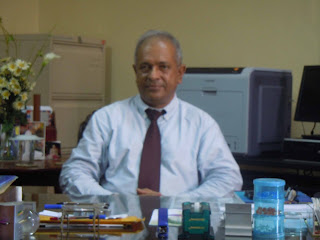 Teachers’ unions of the Colombo University are to write to President Mahinda Rajapaksa, expressing concern about the appointment of Dr. Kumara Hirimburegama as their Vice Chancellor (VC). The unions are expected to meet tomorrow, said Executive Committee member of the Colombo University Federation of Teachers Unions’ (CUFTU), Dr Nirmal Ranjith Dewasiri.
Dr Hirimburegama is the husband of former VC Prof Kshanika Hirimburegama, who now heads the University Grants Commission (UGC). The controversy broke out after President Rajapaksa appointed Dr Hirimburegama as VC over another academic, Prof Lakshman Dissanayake.
Prof Dissanayake secured 18 votes at the University Council election —3 more than Dr Hirimburegama, while a third candidate for the VC post, Dr Prathiba Mahanamahewa, polled only 8 votes. When the UGC sent the three names to the President, he appointed Dr. Hirimuburegama. The appointment is not illegal, as the law gives authority to the Executive to decide. But the unions protested, saying the most qualified candidate—the one who secured a majority at the election—was deliberately bypassed.
“We have still not officially voiced our concern to the President regarding the appointment,” Dr Dewasiri said. “We want to make it known through a formal letter. So far we haven’t decided on any other concrete actions, but we want to continue this protest.”
Dr Dewasiri is also the president of the Federation of University Teachers’ Association (FUTA), which has opposed Dr Hirimburegama’s selection.However, it is unclear whether the campaign will succeed, as there are differences of opinion among academics. On Thursday, lecturers kept away from the annual convocation of Peradeniya University, in protest against politicisation. But on Wednesday, a majority of members of the Colombo University’s Senate defied the CUFTU’s call for a boycott of a meeting scheduled for that day.
Dr Dewasiri admitted that the boycott was “an utter failure”, but said it was because Senate members feared victimisation.
“I think attendance was better than at usual Senate meetings!” he said. “People don’t want to be targeted. Usually, at Senate meetings, the excuses list is longer than the list of those who are present. Some people told me they saw members this time, they had never seen attending before. They clearly wanted to show that their absence was not because of the boycott.”

While the majority of academics agree that “there is an issue”, the general attitude was that the President was unlikely to change his decision in view of their protests, Dr Dewasiri said. “We know it’s not easy to mobilise the academic community, but we will try our utmost to make this a public issue, because, what happened was wrong,” he reiterated.
“There is a tendency to take the status quo for granted,” he explained. “When you take a place like the Medical Faculty, this is a chronic disease. They have made up their minds strongly, not to bother about these issues. There are various vested interests, too.”
“This has gone to dangerous levels,” he warned. “Now, there is this silence. There may not be a breakthrough in the near future, but we will try our utmost to make it a major issue.”
Prof Hirimburegama rejected the allegations. “We are two qualified individuals, and we have rights,” she said. “We have been working together for so many decades. Why did this problem, this husband and wife story, suddenly come up? There are so many cases of husbands and wives working together. There is no such rule that the person with the highest votes should get the VC post. The final decision is with His Excellency.”
Her husband dismissed the protests as “politics”, but said, he welcomed opposition. “In a democracy, we need opposition,” Dr. Hirimburegama maintained. “When we make a mistake, there should be someone to point it out. This is a healthy situation.”
Among other things, the unions argue that there is a serious conflict of interest in appointing the husband of the UGC Chairperson as VC of a University.
“The UGC Chairperson has already violated the University Act by sending all three names recommended by the Council to his Excellency the President, instead of recommending a single name for appointment, which is clearly stated in the Act,” CUFTA says in a letter to Senate members. “Further, she has actively canvassed for her husband to be appointed VC of Colombo University, which is highly unethical, and goes against the norms of decency.”
Dr Dewasiri stressed that the repercussions of such politicisation of the university system were dire. “We know that politicisation is everywhere, and that all appointments to public institutions are being manipulated by political interests,” he said. “But universities, by nature, need autonomy. It’s not an ornament, but a very integral part of university culture.”


“There is a growing attitude among senior academics qualified to be appointed VCs, that they don’t want to apply for the post,” Dr Dewasiri revealed. “I know several people were asked by fellow academics to apply. They clearly said there is no point applying unless you have political backing.”
Extract From Online Sunday Times