All Universities reopen in Sri Lanka

“The UGC Chairman Prof Sampath Amaratunga says that lectures conducted online due to the outbreak of the COVID-19 pandemic have shown remarkable progress. All universities under National University System will commence their academic activities on August 17,” he said.

Addressing a press conference in Colombo Prof Amaratunga said the examinations of the third year students of medical faculties continued uninterrupted from July 15.

He added that all universities should comply with guidelines issued by the heatlh authorities to prevent the spread of Covid - 19.

Commenting on the hostel facilities at universities, the UGC Chairman said that only one student was allowed to occupy a hostel room due to concerns regarding the spread of the virus. “Accommodation facilities will be provided at universities as usual with the resumption of academic activities,” he said.

All universities are expected to conclude the final year exams by August 15, the UGC chairman said.

Decision was taken by UGC after consult with health officials. Currently Sri Lanka is continuously taking measures against the coronavirus. The Government has made arrangements to provide the maximum possible facilities for students to distantly continue their education.

On March, Sri Lanka’s University Grants Commission ordered all universities to close after the country announced its first COVID-19 case.

Ministry of Higher Education has been informed to review the present situation and with the agreement of the University administrations and University Grant Commission UGC decide the date to open the universities for students.

Sri Lanka’s University Grants Commission has acknowledged that new admissions to universities could also be delayed due to the closures and public sector shutdowns as the government declared special holidays and curfew.

This is the fourth occasion that all universities have been closed in Sri Lanka. In 2019, all universities and schools closed after the deadly blasts in churches and hotels that killed hundreds of people on Easter Sunday. The closure lasted a month.

In August 2012, the government closed all universities after a two-month lecturer strike, while in November 2013, universities closed for the Commonwealth Heads of Government Meeting.

Professor Sampath Amaratunga added that in collaboration with the Ministry of Health a circular on healthcare measures to be taken to prevent coronavirus infection in universities will be issued soon in near future.

www.lankauniversity-news.com
LankaUniversity-News.com Sri Lanka University News at 2:31 AM No comments:

Email ThisBlogThis!Share to TwitterShare to FacebookShare to Pinterest
Labels: All Universities reopen in Sri Lanka

Government requests them to report to work from September 2.Sri Lanka President Gotabaya Rajapaksa decides to re-commence, without delay, the programme to provide employment opportunities to 150,000 persons that was halted due to the General Election.

The relevant selected full list of graduates eligible for employment will be published on the official website of the Ministry of Public Services, Provincial Councils and Local Government on August 17. Website - www.pubad.gov.lk

The respective Ministry will commence sending letters of appointment to those who got selected immediately. Appointed candidates should report to their nearest Divisional Secretariat DS office on September 2.

The programme to provide employment to 100,000 poorest of the poor will be implemented by the Task Force established solely for this purpose from 02nd, September.

The number of unemployed university graduates to be recruited is 50,000. For the remaining 100,000 jobs, candidates will be selected from families of the lowest strata of income earners in the society.

The programme to employ 50,000 graduates and 100,000 low-income earners was formulated within weeks after President Rajapaksa assuming office in November 2019.

Shortlisting suitable candidates from applications received from graduates commenced in the first week of February. A Multi-Purpose Development Task Force was established to recruit 100,000 low-income earners. The objective of the programme is to transform Sri Lanka into a country free from poverty as per the “Saubhagyaye Dekma” policy statement of the President.

Chairman of the Election Commission directed to suspend the program to offer jobs for 150,000 unemployed persons following the announcement of the General Election 2020. Accordingly, the programme was suspended. Immediately after the conclusion of the General election on the 5th of August, President Rajapaksa took measures to establish the executive of the Government adhering to the provisions given in the Chapter VIII of the Constitution.

The Prime Minister of the new government took oaths on Sunday, the 9th of August. The Secretary to the Prime Minister was appointed on the following day. A week after the election on August 12, both Cabinet ministers and state ministers were sworn in. Secretaries to the Ministries were appointed on the following day (August 13). The inaugural parliamentary session will ceremonially commence on the next Thursday (20). Following the formal establishment of the administration, the President has decided to implement the programme of providing 150,000 employment opportunities without any delay.

www.lankauniversity-news.com
LankaUniversity-News.com Sri Lanka University News at 12:14 AM No comments:

The Colombo International Book Fair 2020, organized by the Sri Lanka Book Publishers Association for the 22nd consecutive year, begins on September 18 at the BMICH, Colombo. The books exhibition will run till September 27, from 9 am to 9 pm every day. Organizers have arranged special health and COVID19 safety measures.

This is a good news for book lovers. Colombo International Book Fair CIBF 2020 begins at the Bandaranaike Memorial International Conference Hall (BMICH) from the September 18th Friday to the 27th Sunday. CIBF is considered as the Sri Lanka’s largest book Exhibition. There will be strict safety measures due to ongoing Coronavirus outbreak.

When is Colombo Book Fair begin?

Here is a great chance for Pre-schools, school students, university students and higher education students to buy Books, Magazines and Stationery at special discounts. The Colombo international Book fair 2020 will be held from September 18 to 27th at 9.00 am to 9.00 pm.

Colombo International Book Fair 2020 - Largest Books Exhibition in Sri Lanka
Sri Lanka Book Publishers Association is organizing the fair for the 22nd year. Book Publishers Association says there will be about 400 stalls both local and foreign. Around 150 publishing companies will participate in the fair this year. Entrance is free for schoolchildren, university students, members of the clergy and armed forces personnel (in uniform). Others charge a fee of Rs.20 or Rs. 50. Fee is not yet finalized.

CIBF is the largest book exhibition in Sri Lanka and event held annually drawing crowds from all parts of the island.

Special Discounts
The Book Fair will see publishers, importers and retailers of books in English, Sinhala and Tamil as well as stationery, offering their products at various discounts. Pre-schools, Schools and universities can get special discounts. Also discounts ranging from 5% to 70% grants at the event and lot of Bargain Books available at the exhibition. The fair starts at 9.00 am and end 9.00 pm.

Large Crowd
Last year Book Fair (CIBF) visited by a million customers during the nine days period. Due to coronavirus outbreak, there will be special health and safety regulations.

#CIBF #CIBF2020 will be this year hashtag for social media.

Much awaited 2019 A/L Re Correction Results (Re scrutiny Results) to Release before August 2nd week told Examination Department Commissioner Sanath Pujitha to "Lanka Education". "Currently we have completed most of the tasks and there are few more to complete, we are doing the re-calculations, there are 63 subjects for this re-calculations, and we have to complete the Z re-calculations process again" Examination Department Commissioner Sanath Pujitha told to "Lanka Education". He requests from students not to panic and they will release results as soon as they complete the process. 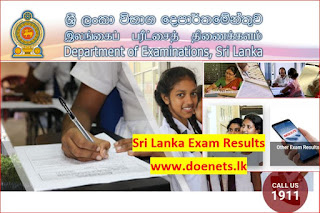 The Re-Correction Results (Re-scrutiny Results) of G.C.E. Advanced Level A/L Examination 2019 will be released to the internet https://doenets.lk/ before 2020 August 2nd week according to the Commissioner.

Examination Commissioner has NOT yet confirmed the exact results release date or time so far.
Results DELAY due to coronvirus outbreak in Sri Lanka. Candidates can check their exam results through http://www.doenets.lk/exam/ Sri Lanka Examination Department official websites.

Candidates can check their results online from the department’s Official website www.doenets.lk
Use below websites or check via SMS.

Get your Exams Result from Mobile Phone via SMS

EXAMS and send to 7777 from your Dialog Mobile

EXAMS and send to 8884 from your Mobitel Mobile

EXAMS and Send to 7545 from your Airtel Mobile

EXAMS and Send to 8888 from your Hutch Mobile

Results delay due to prevailing Coronavirus outbreak, curfew and public service shutdown. Earlier it was planned to release 2020 April. Examination Department Commissioner says results will release during August, probably first two weeks of the month. Examination Commissioner has NOT yet confirmed the exact results release date or time so far.

www.lankauniversity-news.com
LankaUniversity-News.com Sri Lanka University News at 12:39 AM No comments: 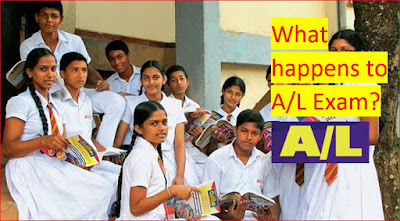 Government considering to postpone A/L Exam again. Exam is on October 12 to November 6. Relevant exam timetable will release soon and students can download it from school's website,

Earlier, Sri Lanka Education minister Dullas Alahapperuma has advised officials to explore whether there is a need to postpone the Advanced Level examination.

Minister told a meeting that a group of students had requested him to postpone the A/L exam, which is scheduled on September 7. Students have requested to postpone exam at least by three weeks.

Meanwhile issuing a statement Education Ministry says final decision on the date of the examination will be decided July first week soon after schools reopen.

“I spoke to the education secretary and asked him to inquire whether the time is not enough for students to prepare for the exams,” the minister said.

Schools will gradually re-open in four stages starting from July 6, a move which will end a nearly four-month lockdown, that came into effect after COVID-19 started spreading in the country.

Issuing a statement Ministry says final decision on the date of the examination will be decided soon after schools reopen in July. Education Ministry Secretary says that A/L examination date will be reconsidered after conducting discussions with students, principals and teachers.

Earlier Minister said 2020 A/L Exam will be held from September 7 to October 2. Relevant time table will be released soon after dates are confirmed.

Ministry has decided to reopen schools from June 29 Monday.

1 – According to the ministry, under first stage all teachers and Principals request to report to schools for the initial preparations.

No decision has been taken to reopen schools for Grade One and Two students.

www.lankauniversity-news.com
LankaUniversity-News.com Sri Lanka University News at 12:00 AM No comments: