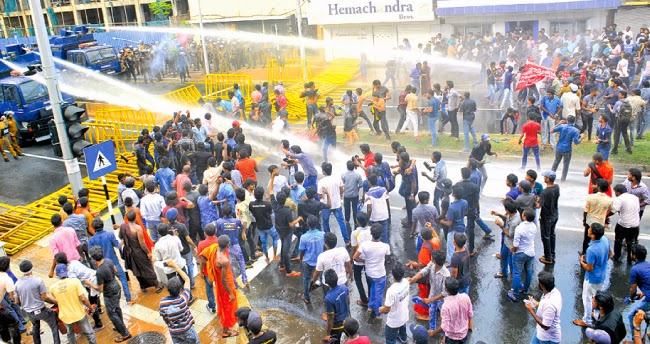 ‍Sri Lanka’s university students’ hopes for a better university system are fading within months of the toppling of Mahinda Rajapaksa’s so-called ‘unshakable regime’, in which they played a key role.

Thousands of university students from across Sri Lanka gathered in the capital, Colombo, on 31 March to protest against the new government’s failure to bring in promised reforms.

Surprise resignations and appointments in the higher education sector have sparked protests across the country over the new government’s failure to address education issues.

The new government’s State Higher Education Minister, Professor Rajiva Wijesinha, resigned in February, only a month after assuming duties with a green light to introduce reforms.

Following pressure from the Federation of University Teachers' Associations or FUTA, the chairperson of the University Grants Commission, or UGC, Professor Kshanika Hirimburegama, quit her job, also in February. Six members of the UGC resigned with her.

FUTA is now protesting against the installation of her husband, Dr Kumara Hirimburegama, as Colombo University Vice-chancellor, and have demanded his resignation.

At the presidential election, students and lecturers desiring a change voted against Rajapaksa’s decade-long regime during which students’ rights were largely suppressed.

The new government had promised students, teachers and parents a completely restructured higher education system within 100 days, but with 80 of the days already passed, there have been no major changes, and the new academic year admissions have been delayed.

Clashes erupted when police fired tear gas and water cannons to disperse students, as a result of which eight students were hospitalised and seven policemen were injured.

Protesters urged the new government to immediately solve problems in the education system, close down private universities and increase the Mahapola scholarships subsistence awarded to students from low-income families, as promised in the election.

Higher education ministry officials earlier had said they would release the university handbook at the end of January. It includes the new university admission forms and guidelines. But following the changes in chairs, the ministry is still struggling to release the book.

Meanwhile the newly appointed chairperson of UGC, Professor Mohan De Silva, says he aims to appoint officers to the university system who are non-political to improve the administration of the universities and to maintain the quality of academic courses.

He also said the UGC had initiated the admissions process for the new academic year and would immediately release the anticipated handbook regarding university admissions.