The Sri Lankan government has begun an investigation on four university faculty members who reportedly attended an Eelam seminar in London while on academic leave.
Secretary to the Ministry of Higher Education Dr. Sunil Jayantha Navaratne has told national radio that the Ministry is conducting a speedy investigation regarding the report that four university professors attended an Eelam seminar and participated in LTTE activities in London.
Sri Lanka's Chief of Defense Staff General Jagath Jayasuriya yesterday revealed that four professors of Jaffna, Peradeniya and Uva-Wellassa universities had left for the UK after obtaining government leave from their work claiming to participate in a special training from August 12 to 20 in London
However, the four academics have, according to the military chief, had attended a conference on establishing a Tamil interim government and participated in LTTE activities.
General Jayasuriya said the Sri Lankan High Commission in Britain has informed about the academics to the military intelligence in Colombo. The investigations following the information have led to identify the four university professors. However, he did not reveal their identities.
The Higher Education Ministry Secretary has told the national radio that it is a severe offence for the academics to go abroad to express solidarity with terrorism.
www.lankauniversity-news.com
LankaUniversity-News.com Sri Lanka University News at 8:24 AM 3 comments:

Chairperson of Sri Lanka's University Grants Commission Prof. Kshanika Hirimburegama said that the Ministry of Higher Education is planning to establish technology departments or faculties in universities to cater to the new technology stream students entering the universities in 2016.
With the intention of preparing the youth to suit the modern high-tech employment market, Sri Lanka has taken measures to enrich the school curriculum with a new subject stream that focuses on advance technologies.
The departments or the faculties to be initiated for the technology stream will be affiliated to the science faculties.
University Grants Commission and the universities are also planning new degree courses for these students. The graduates will be offered the Bachelor of Technology degrees.
The Ministry of Education introduced the new technology stream in schools as a pilot project in July and the first batch of technology students will enter the universities in 2015.
The Technology stream is introduced in addition to the current subject streams, Arts, Science, Mathematics and Commerce.
www.lankauniversity-news.com
LankaUniversity-News.com Sri Lanka University News at 8:19 AM 2 comments: 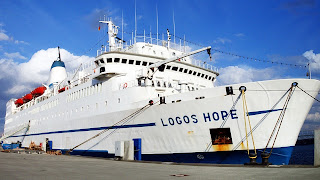 ‘MV Logos Hope’, the world’s largest floating book fair, will be back in Colombo and will be open to the public from August 30 to September 22.
The visiting hours are: August 30 to Sep 12 from 10am to 8pm from Tuesday to Saturday; 2pm to 8pm on Sunday and Monday. From Sep. 13 to 22, it will be from 2pm to 8pm every day.

Tickets are Rs. 100 each and for children under 12 years accompanied by an adult, admission is free.
The book fair on board ‘Logos Hope’ offers an expanded selection of over 5,000 books at affordable prices. They cover a range of subjects including science, sports, hobbies, cookery, the arts, medicine, dictionaries, languages, and philosophy. With children’s titles, academic texts, dictionaries, atlases and more, the book fair is something the whole family can enjoy. Additionally, the rest of the fully air conditioned Visitor Experience Deck is also open for the public to explore. From the Welcome Area, which introduces the new vessel through a short movie and interactive displays, to the International Café, which has ice cream, drinks and snacks for sale, there is sure to be something for everyone.

When ‘Logos Hope’ called Colombo two years ago there were 96,000 visitors. It follows its sister ship ‘Doulos’ which visited Sri Lanka six times.
Logos Hope is operated by GBA Ships e.V., an international, charitable organisation registered in Germany. Since 1970 the organisation has welcomed over 42 million book lovers in over 150 countries and territories around the world.
‘Logos Hope’ is arriving in Colombo from Phuket, Thailand after concluding the visit from August 14 to August 23. It is scheduled to arrive in Colombo on August 28 and will call Muscat, Oman on October 1 for a six-day book fair. 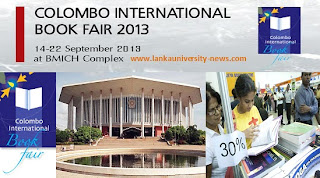 Sri Lanka’s largest book Exhibition , Colombo International Book Fair will be held at the Bandaranaike Memorial International Conference Hall (BMICH) from the 14th to the 22th of September 2013.
Here is a great chance for university students and School students to buy books,Magazines and Stationery at special discounts. The Colombo international Book fair 2013 will be held from 14th September to 22th September 2013 at 9.00 am to 9.00 pm.
The fair organized for the 15th year by the Sri Lanka Book Publishers Association say there will be about 500 stalls of local and foreign. Around 150 publishing companies will participate in the fair this year.
The event held annually drawing crowds from all parts of the island is organized by the Sri Lanka Book Publishers Association.
Special Discounts will be given for Schools and universities. Also discounts ranging from 5% to 70% are given at the Event and lot of Bargain Books available at the exhibition. The fair start at 9.00 am and end 9.00 pm.
Last year Colombo International Book Fair (CIBF) was visited by a million customers during the nine days period. Large crowd will be visiting day time, hence if you want select books freely recommended visit at night. Special bus service has arranged from Bambalapitiya to Borella.
www.lankauniversity-news.com 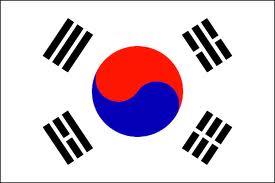 Sri Lanka Bureau of Foreign Employment (SLBFE) says that the applications for the Korean Language Proficiency Examination (KLPE) would be issued Soon.

Results of the Korean Language Competent Examination will be declared through the Internet on the 1st of November. Minister Dilan Perera says the examination was held in six centers of the Colombo District successfully. 20,536 candidates sat for the Exam.


The minister further says that large number of employment opportunities in South Korea will be made available for the Sri Lankan youths this year and next year.

The Korean Exams results will be released on November 1 and can be checked by logging www.slbfe.lk , www.eps.go.kr and www.hrdkorea.or.kr web Sites

Admissions for candidates for the Korean Language examination will be issued between August 12-15 at all decentralized offices of the Sri Lanka Foreign Employment Bureau.

The Examination will be held in Colombo on next month.