A medical faculty will be established in the Kothalawala Defence University.


A Bill presented by the government for the establishment of a Faculty of Medical Sciences received 16 votes in favour and a single vote against it  in Parliament.

Health Minister Maithripala Sirisena:
The Cabinet has approved a proposal to allow the Sri Lanka Medial Council to recognise the degree of Bachelor of Medicine and Bachelor of Surgery of the General Sir John Kothalawala Defence University. The first batch of officer cadets of the Faculty of Medicine of the General Sri John Kothalawala Defence University will be conferred with the degree of Bachelor of Medicine and Bachelor of Surgery (MBBS) in 2014. Therefore, it is necessary to make provision under the Medical (Amendment) Bill to enable the Sri Lanka Medical Council to register them under the Bill to practice Medicine and Surgery in Sri Lanka.
The doctors and nurses in the public sector hospitals go abroad for education purposes. Some of them go for employment. This has resulted in a shortage of qualified doctors. So the passing out of qualified doctors from the John Kotalawala Defence University's Medical Faculty will address this shortage. These doctors provide medical facilities not only to the Armed Forces personnel but also their family members. The Armed Forces personnel who sacrificed their lives and limbs to wipe out terrorism are engaged in developing the country today. They as the true sons of the nation who have done their best for the people to live in peace. Therefore we need to strengthen them by uplifting their livelihoods and providing facilities.

Dr. Rohana Pushpakumara (UPFA):
The Armed Forces personnel contributed immensely in bringing peace to the motherland after nearly 30 years. Now they are spearheading a new battle - the development battle. The country is reawakening with all its might and the professionals are confident that their skills and talents will be made use of in the development drive. We need more MBBS doctors to uplift the health facilities of not only the Armed Forces personnel and their families but also the public. Therefore, these Amendments are very important.

With these Aendments, students who followed MBBS degrees at the General Sir John Kothalawala Defence University will be registered under the Medical Council as MBBS doctors.

Ajith Mannapperuma (UNP):
The enrollment procedure to the universities should have to be fair. The standards of the education and professions would go down if the government recruited students who are less qualified. There is a big question about the quality of degree courses offered by the Malambe Private University. These problems should be resolved immediately. Otherwise, our free education system will be destroyed.

Deputy Agriculture Minister W. G. Padmasiri:
Our Armed Forces contributed immensely to eliminate terrorism. Today as true sons of the nation, they continue to render their support to the nation's development program until the country's economy reaches a level that would enable all the communities to lead comfortable lives. The highest percentage of professionals lost to the brain drain are the medical doctors. The setting up of a medical faculty at the KDU would provide some answers to this problem.

Vijitha Herath (DNA):
Health Minister Maithripala Sirisena has been able achieve positive changes in the health sector. There is a request from the people to enact the Senaka Bibile Drug Policy. He also attempts to do it.

But what is the purpose of today's Amendment. As you said the doctors are not willing to join the Army as they are recruited to the rank of captain. So this Amendment is made. So this is not the best solution.

Ajith Kumara (Independent):
What is the basis to admit medical students to the Kotalawala Defence University. Has it been granted the approval of the Medical Council? Another issue is that are the students need to pay to follow the course? Are the doctors passing out from the institution entrusted only to fulfill the need of the forces?

Petroleum Industries Minister Anura Priyadarshana Yapa: If the world is not changing Ajith's speech is correct. But the world is changing. It is our government that increased the intake of university students. How much money is spent by our parents to send their children to foreign universities? I know there are a large number of Sri Lankan children studying medicine at the Chittagong University in Bangladesh. The applicants to the Medical Faculty in Kotalawala Defence University should have cut off marks.

But the people like Ajith think there is only one model in the world. The education field is being modified and various positive subjects are being introduced.

With this move the Tri-forces need of doctors could be fulfilled. They will be qualified enough to work in any military hospital in the world.

The doctors normally like to work in Colombo and its suburbs. This situation has to be changed.

Nalin Bandara (UNP):
Your are attempting to admit less qualified students to medical universities. During the past three decades the MBBS doctors supported the Armed Forces. I don't think the MBBS doctors would remain in military service with these moves.

Rikillagaskada operation theatre is closed as there is no anesthetist. Kurunegala Hospital's theatre is also closed.

Now there is need to recruit a large number of doctors to the Armed Forces. This is a good move. And I suggest that the Kotalawala Defence University should consider the Police Service and recruit students to serve in the Police Service as they too have hospitals.

The MBBS doctors passing out from the KDU Medical Faculty are well-qualified. We need Armed Forces doctors to the to serve Armed Forces personnel and their families. They will also be deployed whenever and wherever the need arises, be it an emergency or a disaster situation or routine development activities. The Opposition members said that there is a shortage of MBBS doctors in the country. Therefore this move will help to overcome this shortage.

A. H. M. Azwer (UPFA):
Some elements are trying to topple this government. But they never ever be able to do so as the people are very much supportive of President Mahinda Rajapaksa. The Opposition is trying to create an anarchy situation in the parliament. Today state hospitals provide best and quality medical treatment to the people.

Facilities of the government hospitals have been upgraded. A sufficient number of doctors and nurses have been attached to these hospitals.

H. L. M. Harris (UPFA):
Hospitals in the Eastern Province have been developed immensely in the aftermath of the war but there are several problems still to be solved. It is reported that several malpractices take place in some hospitals. The health sector has recorded a significant improvement in the past five years.

Higher Education Minister S. B. Dissanayake:
Students who qualify for university admission by passing three subjects at the GCE A/L exam with highest Z-core can apply to the courses offered by the KDU. In addition, they should posses minimum physical standard in height, weight and show the required levels of physical and mental stamina. During the degree program approximately 75 percent of students time is allocated for academic programs, while 25 percent is for defence studies consisting of various military training.

The Malambe Private Medical College has been recognized by the Medical Council. It has given scholarships to students who have obtained highest Z-core rates from GCE A/L exam. It is reported that a student who proceed to the USA for higher education pays Rs. 7.5 million per year. In this manner, charges for the local private universities are very low. Today, 1,980 undergraduates are studying at KDU. Our Medical Ordinance is very strong. Through these Amendments, the Medial Council will register the first batch of officer cadets passed out from the KDU Medical Faculty as MBBS doctors. 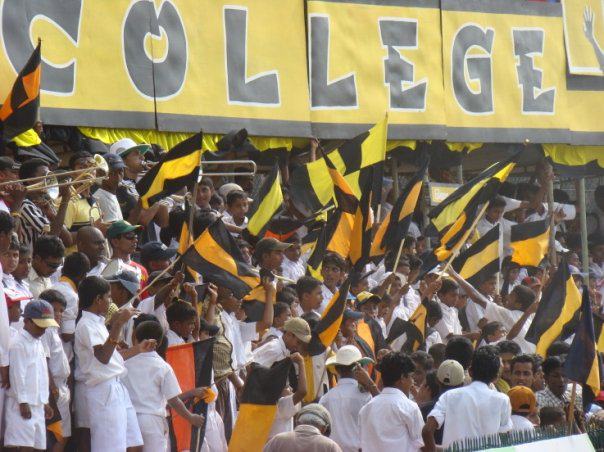 The 109th Lovers Quarrel will be started on 21st of March,2014 at 9am at the Galle International Cricket Stadium.

The 109th big match between Richmond College and Mahinda College known as the lover’s quarrel will be played at the Galle International Cricket Stadium on the 21st  and 22nd. Live Match

Live Score Updates >>>>
The match was first played in 1905 and was won by Richmond College. Mahinda College registered their first win in 1908 and led the series with 23 wins to Richmond’s 21.

Mahinda College registered a ten wicket win in 2008 while Richmond have been deprived of a win for the last 43 years and will be out to break the hoodoo this year. 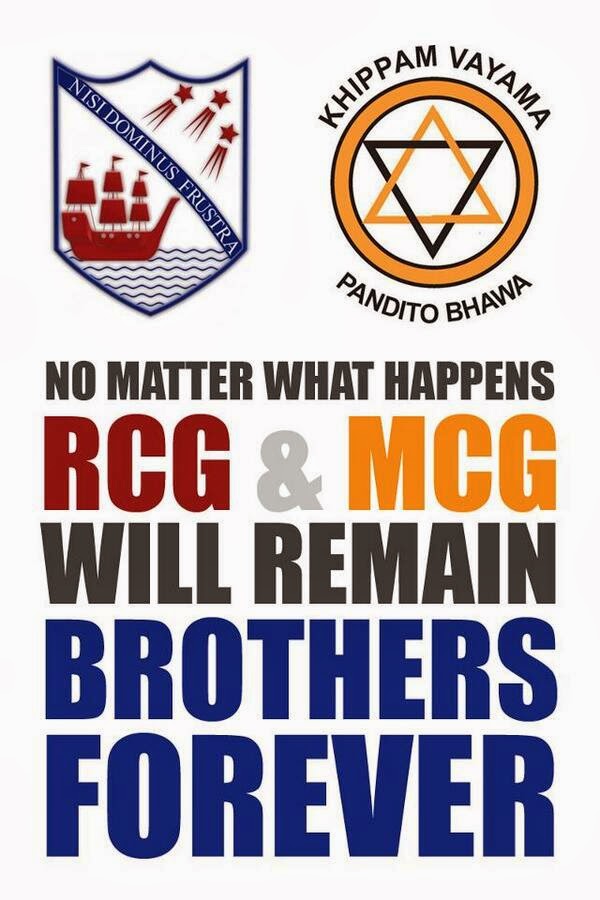 P H K H Ranasinghe of Mahinda holds the record for the highest score in the series with 162 runs scored in 1972 while fellow Mahindian Somasiri Ambawatte scored a century and captured all ten wickets of the Richmond innings in 1953 to hold the bowling record and also the best all round performance to-date.

The Richmond–Mahinda Cricket Encounter is an annual cricket big match played between the first XI cricket teams of Richmond College and Mahinda College in Galle, Sri Lanka. It is one of the longest cricket match series in Sri Lanka, having played for 109 years.The match is also known as the "Lovers' Quarrel" in public and it is played at the Galle International Stadium. Lovers' Quarrel was begun in 1905, under principals Rev. James Horne Darrel of Richmond and Frank Lee Woodward of Mahinda.
www.lankauniversity-news.com
LankaUniversity-News.com Sri Lanka University News at 12:19 AM 1 comment: 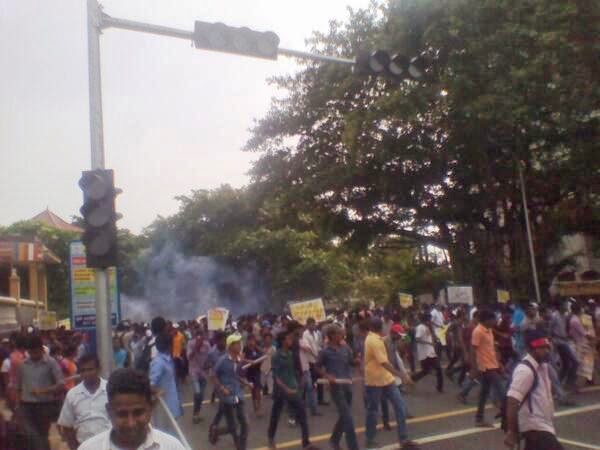 Arrest warrants against 15 undergrads
The Mahara Chief Magistrate issued warrants for the arrest of fifteen students of the Kelaniya University, who were accused of disturbing the peace by holding a protest march despite a court order forbidding it.

The arrest warrants were issued as they had failed to present themselves in Court yesterday following a complaint that they had gone ahead with the protest.
Source : DailyMirror 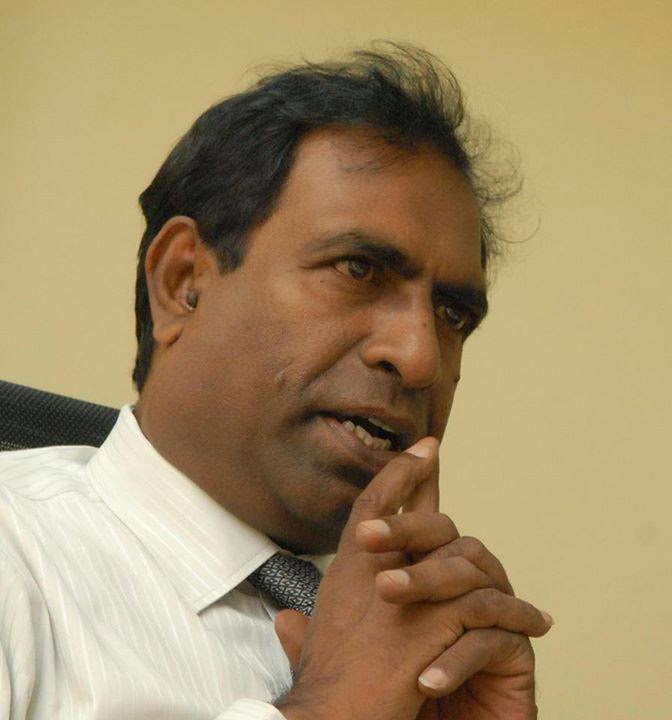 His Excellency the President Mahinda Rajapaksa has appointed Professor Y.M.Sunanda Madduma Bandara as the Vice-Chancellor of the University of Kelaniya for a period of three years with effect from 20thMarch 2014.


Prof. Bandara is a Professor in the Department of Economics at the University of Kelaniya as well as the Director General of the Economic Development Ministry.

He had his education at Mailapitiya Maha Vidyalaya and entered the University of Kelaniya from Thalathuoya Hewahata Central College, Kandy.