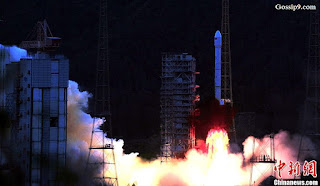 Turning a new page in Sri Lankan history, entering in to space era for the first time, Sri Lanka's first communication satellite Supreme SAT-I launched to orbit on November 27 ,2012 around 3:43 p.m. local time from the Xichang Satellite Launch Center in China.Now the Satellite has positioned over Sri Lanka.

Earlier it was scheduled to launch on November 22 but postponed due to bad weather in the outer space and some technical problems said President Mahinda Rajapaksa’s youngest son Rohita Rajapaksa who is a technical advisor/engineer of the project. 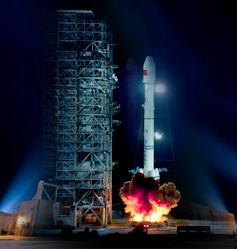 Sri Lanka's first Communications Satellite SupremeSAT – I  launched on November 27, 2012 at 15:43hrs on board China's Long March 3B/E Launch Vehicle from the Xichang Satellite Launch Centre. This will be the beginning of new era for Sri Lanka and will be etched in our country's proud history & will stand as a major milestone for Sri Lanka in developing the Motherland as a Naval, Aviation, Commercial, Energy and Knowledge hub, serving as a key link between the East and West.  The satellite will be deployed at 87.5E in the Geo-stationary orbit approximately 36000 km above the surface of the earth and has a design life of 15 years. The SupremeSAT – I was built by Thales Alenia Space of France. Design is based on SB 4000 series satellite bus which comes under the medium class telecommunications satellite category with its launch mass of 5100kg. SB 4000 series has a successful flight heritage, hence it's a very stable and reliable space platform. Having a payload of 56 transponders on board SupremeSAT will be capable of providing communications services, including broadband Internet, telecom and broadcasting and will cover parts of the Middle East, South & Central Asia and also Australia.

The scheduled Sri Lankan First Satellite “SupremeSAT 1” launching will not take place  today due to bad weather in the outer space and it will be delayed from five days said President Mahinda Rajapaksa’s youngest son Rohita Rajapaksa who is a technical adviser/engineer of the project.

More details in our previous article :
LankaUniversity-News.com Sri Lanka University News at 6:52 AM