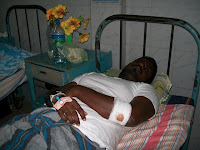 The reason for the clash was a Hostel issue and at the moment Police team is giving the protection for students.

The police said 6 female students were among those who sustained injuries in the clash. Applied Science faculty of the university has been closed indefinitely as a result of the clash.
www.lankauniversity-news.com
LankaUniversity-News.com Sri Lanka University News at 4:00 PM