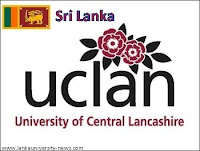 
According to Dr. Jayatissa, the students union would continue to protest against moves to set up private universities and ensure that the country's free education system is safeguarded.