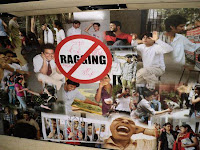 Three students of the Peradeniya University who pleaded guilty to ragging a new student were given a suspended sentence of six months rigorous imprisonment.
The Kandy Provincial High Court suspended the sentence for five years after which the three students will serve six month sentences while compensation will also be paid to the victim.
The students were convicted of ragging the victim on or during October 26 and 27, 2011 while six allegations were brought forward against them including forcing the victim to perform sexual acts. Extracted from :adaderana