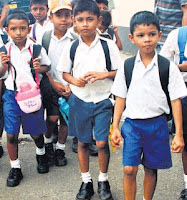 Education Minister Bandula Gunawardana said that the cut-off-point of the Year-5 scholarship examination has been reduced from 163 to 157. At the moment Scholarships are given only to 15,000 students. Sri Lanka President presenting 2015 Budget proposed to increase it up to 25,000. Hence Ministry has decided to reduce the marks.

Addressing a meeting held at the Watareka Junior School, the minister said this was enabled after the number scholarships has been increased from 15 thousand to 25 thousand in the 2015 budget proposals. At the same time, President Mahinda Rajapaksa said during the budget speech that the current Year-5 scholarship grant of 500 rupees will be increased upto 1,500 rupees. Minister Gunawardana said that Year-5 scholarship recipients will be paid the new study grant with effect from the month of January next year.
Reduced marks will be published after 2nd budget readings.