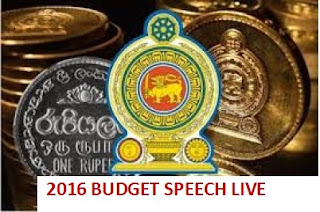 5 year multiple entry visas for international students to be provided with the aim of creating an education hub and also provide education tourism
03:17 PM

University seminars to be extended to 8 pm daily
03:15 PM
10 storey building at Ruhunu Medical faculty to double intake to 300 students

Scholarships for deserving studentds to Harvard/MIT universites in the US and NUS-Singapore
03:13 PM
Rs.200,000 insurance cover for all school children
03:12 PM
Savings accounts to be opened for school children as CSR projects by banks

University admissions to be increased to 50,000 (from a current 20,000) annually
03:10 PM
Differently abled children to be given improved facilities

Agrahara insurance scheme to be extended to teachers
03:09 PM

Tabs and laptops to be provided at a cost of Rs 5,000 million for high school students
03:07 PM
New subjects: Fashion designing, hospitality and logistics to be included in the school curriculum
03:06 PM
Rs 2,100 million for school labs and other facilities
03:05 PM
Additional financial resources of Rs 18,740 million for education

Galle, Hambantota and Jaffna fisheries sectors to be improved
02:52 PM
Local milk production to be increased through state investment of Rs 200 million

The Appropriation Bill outlining allocations to be made for each ministry for year 2017 was tabled in House for its First Reading on 20 October.
The government has estimated an allocation of Rs. 1.82 trillion (US$ 12.4 billion) for expenditure for next year, which is lower than the 2016 allocation of Rs. 1.95 trillion.
Minister Karunanayake said a development oriented budget with long term action plan to fulfill aspirations of all citizens will be presented to parliament. The theme of the budget this time is "Towards rapid development with benefits to all".
According to the Minister the next year's Budget 2017 has focused on strengthening the national economy of the country.
He said that priority has been given to the people's proposals in preparing Budget 2017 and, the needs and views of the people were taken into consideration in order to make them representatives in Budget 2017.
Among the wide range of groups whose views are included in the budget are farmers, fishermen, laborers, small, medium and big time entrepreneurs, self-employees, industrialists, investors, trade union representatives, civil organizations, political parties, professionals, university teachers, professors and religious leaders.
In addition, the Finance Ministry had received nearly 2500 proposals from the ordinary people living in different parts of the island to be considered for Budget 2017.
The Minister further said that close attention has been drawn to the proposals with a view to solve youth unemployment, new plans to reduce cost of living, plans to promote several sectors including investment, education, health and agriculture.
"The budget proposals this time is expected to take tangible initiative to end poverty in the country. It will also be the stepping stone for a Grand National operation to save the future generation from the prevailing colossal debt trap through its long term development agenda," he said.

Minister of Finance Ravi Karunanayake will present the Budget Speech.