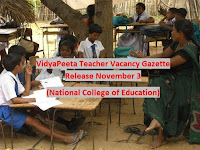 
-- Old News ----
2017 National College of Education ජාතික අධ්යාපන විද්යාපීඨ "VidyaPeeta" Interviews will be held on March 12.
About 4000 students to recruited for 19 National college of education.