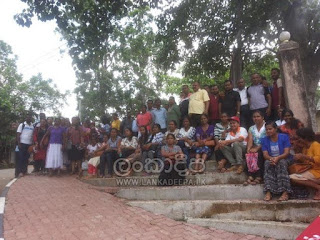 Striking university non-academic staff end strike. Lectures to start soon..
Striking non-academic staff of all the universities of Sri Lanka have decided to call-off the nearly two-month (44 days) long strike after the government issued an ultimatum.

Co-Chairman of Universities Trade Union Joint Committee Edward Malwatte said all the members will be informed that the strike launched on February 28 was over.

All universities are likely to return to normal by Monday after the Government agreed to a key demand for the increase of an allowance to non-academic staff members.

Accordingly, the non-academic staff of all universities will report for work from the  April 17th.

The Ministry of Higher Education Wednesday ordered all the striking non-academic staff of all the universities of Sri Lanka to report to work on or before April 17.