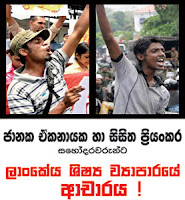 This great song has dedicated and tribute to H.P. Sisitha Priyankara De Silva who died in an accident on September 27.

Sisitha Priyankara De Silva was a Ruhuna University first year student of management faculty, a front line activist of the IUSF.
The two students who died when the motorcycle they were traveling in collided with an electric post at Imbulgoda, in Gampaha. The other student was Janaka Bandara Ekanayake, Kelaniya University.
Inter University Students' Federation says that the death of two of their activists in an accident is suspicious.