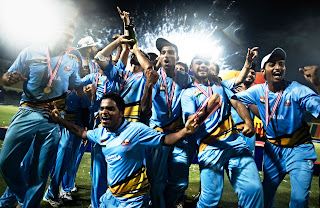 D. A. V. College, Chandigarh bearing the Indian flag won the inaugural Red Bull Campus Cricket World Finals, after beating Pakistan in the final, by 49 runs. The win brings to an end five days of intense competition that was underlined by some remarkable performances and followed by the announcement of a global All Stars team that will take on the champions in India.

The tournament which started late last year in 100 campuses across six countries came to Sri Lanka for World Final. Beginning on the 2nd of April and held at the R. Premadasa Stadium, the Red Bull Campus Cricket World Finals saw the crossing of swords between the best campus cricket teams from Australia, Bangladesh, Great Britain, India, Pakistan and Sri Lanka.

From the group stages to the final, all 15 matches of the Red Bull Campus Cricket World Final, were hard fought battles between the best college-level cricketers in the world. But just like the tournament itself, the cricketers who played in it weren’t ready to treat the tournament as just another college-level cricket engagement. The four days of cricket contained many performances on par with national-level cricket and gave the world a glimpse of the future stars of cricket.

It had everything you would expect from a T20 tournament - long boundaries, aggressive batting performances, intense last overs, great comebacks and sensational catches. After 12 group stage matches, Great Britain, India, Pakistan and Sri Lanka qualified for the semifinals. Remarkably in the group stage, the competition was so close that no team went unbeated. Yet, eventually in the semis it was Sri Lanka playing India and Great Britain facing Pakistan in two hard fought matches that ended with India and Pakistan qualifying for the final.

In the final, India was rocked early on by some good bowling by Meer Hamza and Nabeel Khalid. But, with a captain’s innings from skipper KunalMahajan of 73 runs, India put on 170/8 in their 20 overs. In reply Pakistan, struggled to get off the ground and was bowled out for 121. Gurinder Singh took four wickets to destroy Pakistan’s innings and any chances of winning the tournament. India deservedly emerged victorious, living up to the billing of one of the favourites of the tournament.

The man of the tournament wasGurinder Singh for an all-around performance where he took 16 wickets and scored 246 runs including the only century of the tournament. Great Britain’s James Lomas received the ‘Best Bowler of the Tournament’ award and India’s Jaskaran Singh was adjudged as the best batsman across the five days of cricket.

The Indian team, apart from the title, earns the right to play a Red Bull Campus Cricket All Stars comprising players from the other five nations that played the Red Bull Campus Cricket World Finals. The schedule for the series of matches to be played in the home country of the champions later this year will be announced in the coming days.
Red Bull Campus Cricket All Stars Team:
Faraz Ali, AmmarHasan, Nabeel Khalid, Shahzaib Khan and Rameez Aziz from Pakistan; SahanPerera, RandikaPerera, RumeshMadushanka and GagithAbeysekara from Sri Lanka; Tanmoy Roy, Bin Murtaza, Anjum Ahmed and HassenHuzzam from Bangladesh; Thomas Atallah, James McNeil and Brandon McLean from Australia; Luke Blackaby, James Lomas and Robert Woolley from Great Britain.
Also find all Red Bull Campus Cricket images and releases here:
https://www.redbullcontentpool.com/content/international/products/perm/1364800108412-1076674229
For the latest images and videos please register onto:www.redbullcontentpool.com
For tournament updates please follow us on:
www.redbullcampuscricket.com
@RBCC2013| @RedBullLK |@inRedBull| @redbullAUS
www.facebook.com/RedBullCampusCricket