FUTA Protest on May 01 Colombo 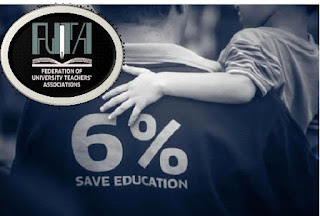 University teachers have planned to resume their agitation and bring all their members to Colombo on May 01 for a fresh protest.


President of the Federation of University Teachers’ Associations (FUTA) Dr. Nirmal Ranjith Dewasiri told The Island that they would launch FUTA’s ‘manifesto’ on the present crisis in the education sector on the International Labour Day, May 01.

He said that the FUTA had planned to distribute the copies of the manifesto at all May Day rallies in Colombo and the suburbs.

"Our main objective is to ensure the allocation of six per cent of the GDP for the education sector," Dr. Dewasiri said, adding that they would hold a vehicle parade, too, on May 01.

The senior academic said that the FUTA had temporarily suspended its 100-day strike last year on the government’s assurance that its demands would be met step by step, but the situation in the education sector had gone from bad to worse during the past six months.


"We expect to educate the people, who will gather at May Day rallies, on the present education crisis," he said. Exteact From Online Island
www.lankauniversity-news.com
LankaUniversity-News.com Sri Lanka University News at 2:51 PM