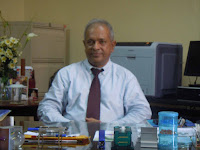 The Teachers' Association of Colombo University has decided to commence a continuous strike unless the new Vice Chancellor of the University Dr. Kumara Hirimburegama resigns within two weeks.

Dr. Kumara Hirimburegama is the husband of Professor Kshanika Hirimburegama who was the former Vice Chancellor of the university. She was promoted as the Chairman of the University Grants Commission.
Both appointments were made by the President of Sri Lanka Mahinda Rajapaksa under his executive powers.
Dr. Hirimburegama assumed duties as the Vice Chancellor of Colombo University yesterday.
The Teachers' Association of the Colombo University has decided to boycott the functions participated by the VC and also not to admit the orders and written instructions of the VC.
However, the lectures and examinations are held as usual in the university, the Teachers' Association of the Colombo University says.

Following extract from Online Island
The Colombo University Teachers’ Association (CUTA) yesterday threatened to launch an all-out strike if the newly appointed Vice Chancellor does not step down from the post within two weeks, or if President Mahinda Rajapaksa does not justify his appointment.

CUTA committee member and President of the Federation of University Teachers’ Associations (FUTA) Dr. Nirmal Ranjith Dewasiri told The Island that the teachers were opposed to the new VC, Dr. Wijaya Kumara Hirimburegama, claiming that the appointment was politically motivated and unethical as his wife was serving as the Chairman of the University Grants Commission (UGC).

"We decided, at yesterday’s meeting, to boycott all meetings and communication with the new VC," Dr. Dewasiri said adding that they would not accept memos or letters from the newly appointed VC.

The three names were sent to the President through the UGC, Dr. Dewasiri said.

"Our association believes that Prof. Lakshman Dissanayake is the most qualified person to handle the post," Dr. Dewasiri said.
The senior academic said that the CUTA will inform President Rajapaksa of their decision and they would go for an all out strike if President does not provide a solution.
The Colombo University announced yesterday that Dr. Wijaya Kumara Hirimburegama was appointed as the new Vice Chancellor of the Colombo University by President Mahinda Rajapaksa with immediate effect.