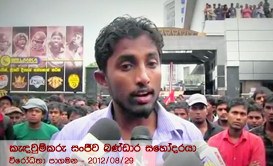 
Last week he was issued summons and ordered to appear before court on July 8 to inquire into the breaking of his bail conditions.


The Colombo Crimes Division informed the Fort Magistrates Court that Bandara was granted bail on condition that he would not be a member of any unlawful gathering.
The CCD said that his participation in the recent protest march to Nugegoda was a violation of this condition.

Meanwhile releasing an announcement National Organizer of Socialist Students Union (SSU) Dr. Nalinda Jayatissa said that the government’s agenda of destroying free education, which is a property of the masses, should be defeated and all should rally to protect free education states an protesting against remanding of the convener of IUSF Sanjeewa Bandara on false charges.