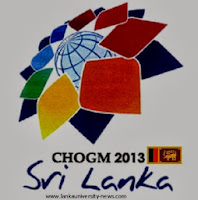 The Commonwealth Heads of Government Meeting (CHOGM)( පොදු රාජ්‍ය මණ්ඩලයීය රාජ්‍ය නායක සමුළුව - ශ්‍රී ලංකාව) is held every two years to enable leaders of Commonwealth countries to come together to discuss global and Commonwealth issues, and to decide on collective policies and initiatives.
The Commonwealth is home to two billion citizens of all faiths and ethnicities and includes some of the world’s largest, smallest, richest and poorest countries. Member countries come from six regions: Africa (19); Asia (8); the Americas (3); the Caribbean (10); Europe (3); and the South Pacific (11). This year, CHOGM is taking place in Sri Lanka, the first time an Asian country is hosting the summit. Every CHOGM is jointly organized by the host country and the Commonwealth Secretariat. These biennial meetings serve as the principal policy and decision-making forum to guide the strategic direction of the association.
CHOGMs have focused on a range of global issues, including international peace and security, democracy, climate change, multilateral trade issues, good governance, sustainable development, small states, debt management, education, environment, gender equality, health, human rights, information and communication technology, and youth affairs.
The theme of the 2013 CHOGM in Sri Lanka, is “Growth with Equity” CHOGM 2013 will be held from 10th to 17th November 2013 with the Heads of Government Meeting and following parallel events as indicated follows.
Pre - CHOGM FM’s meeting ’3A- 13 - 14 Nov 2013, BMICH Colombo
Pre - CHOGM Foreign Secretaries meeting’3A-
Pre – CHOGM Media Briefing’3A- 13 Nov 2013, BMICH Colombo
Commonwealth Youth Forum’3A- 10-14 Nov 2013, International Convention Centre, Hambanthota
Commonwealth Business Forum’3A- 12-14 Nov 2013, Cinnamon Grand Colombo
Commonwealth Business Forum’3A- 10-14 Nov 2013, Chaya Tranze, Hikkaduwa
Sri Lanka as the host government has the total responsibility of organizing the meeting and the Commonwealth Secretariat will play an integral role in the preparations for CHOGM 2013.
Scope of the task assigned to Sub Committee on Media and Publicity
Designing and commissioning of the CHOGM 2013 logo.
Designing, commissioning and maintenance of the official web site of the CHOGM 2013.
Creating public awareness - Local and International
Designing, commissioning and maintenance of media center
Media Accreditation process
Host Broadcaster
Progress of the activities assigned for Media and Publicity sub committee
Logo
Open completion was organized in the year 2012 to select official logo of the CHOGM 2013. More than 150 entries were received for this competition.
The design submitted by Jagath Jayasinghe has been selected as the logo of CHOGM 2013 which has been subsequently accepted by commonwealth secretariat in London as official logo of CHOGM 2013.