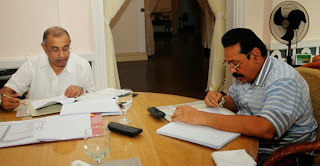 
Steps will be taken to upgraded Ocean University (Sagara Vishwa vidyalaya) as a University.

Propose to increasing and modernizing hostel facilities in universities, steps will be taken to accommodate second and third year students in Hostels or houses close to universities.

Lecturers’ salaries to be increased by 5% Educational allowance.

The second reading of the budget would commence on the 22nd. The debate will continue till the 29th and the vote will be taken on the same day at 6.30 p.m.
The committee stage of the budget proposals would commence on 2nd December and conclude on the 20th. At 6.30 p.m. on the same day vote would be taken for the third reading of the budget.
The Appropriation Bill on total government expenditure estimated at Rs 1,542 billion for next year was presented to Parliament on the 22nd October.
The biggest allocation has been made to the Ministry of Defence and Urban Development at Rs 253 billion. This year's defence budget is Rs 289 billion.
The President's expenditure for the next year has been estimated at Rs 85 billion. This year it is Rs 74 billion.
Among key spending amounts set for ministries for the next year, include Ports and Highways Rs 144 billion up from Rs 131.4 billion this year, Health Rs 117.6 billion from Rs 93.5 billion this year, Mass Media and Information Rs 26.8 billion from 27.1 billion this year, Education Rs 38.8 billion from 37.9 this year, Higher Education Rs 29.5 billion from this year 27.9 billion.
The Ministry of Public Relations had been allocated Rs 2.4 billion while Economic Development Ministry has been allocated Rs 106 billion for the next year.
Ministry of Law and Order has been allotted Rs 52.3 billion for next year.
The Appropriation Bill has set a borrowing limit of Rs. 1,100 billion for 2014, down 15 percent, from the Rs.1,295 billion set in the Appropriation Bills for 2013.
Rs 300 million has been allocated to the Prime Minister for next year.www.lankauniversity-news.com
LankaUniversity-News.com Sri Lanka University News at 12:07 AM