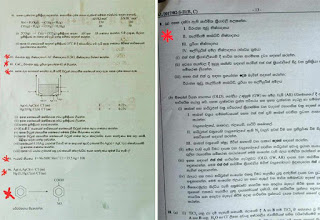 A lifetime ban has been imposed on the student who was found guilty of leaking the GCE A/L Chemistry paper, from sitting any examinations held by the Examination Department, the department said.

Controversial leaflet containing questions from the second paper of the GCE Advance Level Chemistry paper was not printed before the examination, the Education Ministry said.

Police said that the father of the student suspect is a doctor attached to the Police Hospital.

It is alleged that the student used an electronic device smuggled into the examination hall to leak questions of the paper to the tuition master while the exam was ongoing, in return for answers to the questions.

Two other suspects were earlier arrested in connection with the scam. However, the main suspect tuition master has fled the area and has so far evaded arrest. The Police arrested the father and the brother of the Gampaha tuition master who is alleged to have printed and distributed the lealfet.

They said the tuition teacher from Gampaha now gone missing has also been involved in the distribution of a leaked test paper.

The Gampaha Police said, they recovered a Tab whose data contained the A/L Chemistry questions.

When contacted, Commissioner General of Examinations, W.M.N.J. Pushpakumara said the paper had been leaked only after the exam started. "Therefore the A/L Chemistry question paper would not be suspended,".

“Police informed us that the distribution had occurred after the examination had started. It has been revealed that the suspect had received the questions at 9.15 a.m. Someone may have transmitted the questions using a mobile device,” he said.

Sri Lanka Examinations department commenced an investigations into an incident where a Tuition master (Ranasinghe) has allegedly distributed leaflets stating that he had already discussed several questions in a seminar which were included in the second part of 2017 Advanced Level chemistry paper.

A tuition master (Ranasinha, doing classes in Nugegoda Rotary, Kurunegala, Ratnapura & several places islandwide) who conducts classes for chemistry has had distributed these leaflets in front of Ratnaveli Balika Vidyalaya in Gampaha requesting the students to compare the paper he had provided at a seminar and the 2017 A/L original paper which the students had just faced.
Then the students had noticed the similarity in three questions with real paper and distributed leaflet.
Tuition master had said paper was discussed at one of his seminars. The examinations commissioner general noted that a complain had been lodged at the police headquarters on this matter.
Leaflets are usually distributed by representatives of tuition teachers in the close proximity to the exam centers, even though it is a punishable offence. 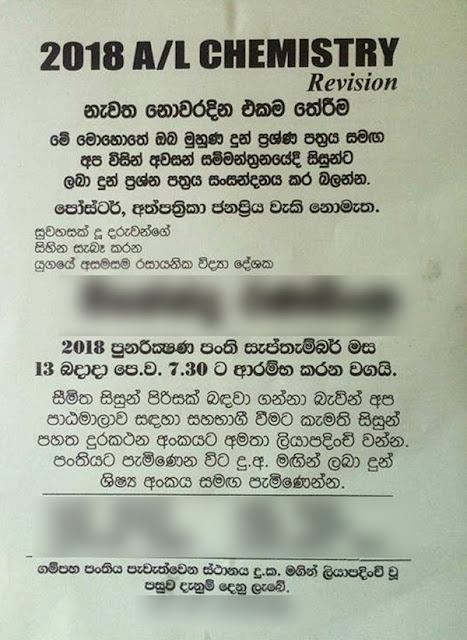 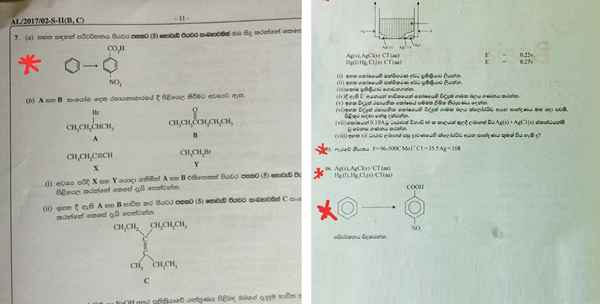