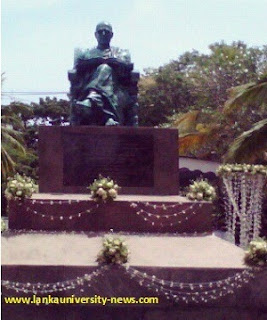 The unveiling of the statue of Ven. Welivitiye Sri Soratha Thera, founder of Vidyodhaya University, University of Sri Jayewardenepura, took place at the university premises today , under the patronage of  Sri Lankan President Mahinda Rajapaksa & Higher Education Minister S B Dissanayake.
The event coincide with the 50th memorial of the monk who was also the first Vice Chancellor of the University.

The University was ceremonially opened on February 16, 1959 with Governor General Sir Oliver Goonatilleke, as the Chief guest. The university was set up following a government decision to bestow university status to the Vidyodhaya and Vidyalankara Pirivenas. Accordingly, the two universities were established at Maligakanda and Kelaniya respectively.