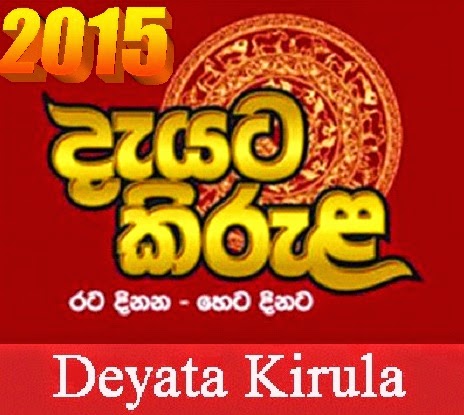 The 2015 Deyata Kirula National Development Exhibition will be held at Kotawilawatte and at the Mahinda Rajapaksa Vidyalaya at Wellamadama in Matara.
This is the first occasion that the Deyata Kirula Exhibition is to be held at two locations.
It was decided to hold the Deyata Kirula National Development Exhibition next year at two locations in the Matara District. The decision was arrived at a meeting held at the Matara District Secretariat. Accordingly one of the locations will be the premises selected for the Matara New Town Plan at Kotawilawatte in Weligama. It spans 47 acres. The other Exhibition site will be the premises of the Mahinda Rajapaksa Vidyalaya at Wellamadama in Matara extending 24 acres.
Minister Ranjith Siyambalapitiya said that action will be initiated from the next Deyata Kirula to endow an eternal souvenir to the Matara population constructing new buildings centering on these two locations. The Vice Chancellor and many students made a request to stage Deyata Kirula within the Ruhuna University premises.
Due to objections raised by some students, the people of the area raised their opposition against these students. But Minister Ranjith Siyambalapitiya said that the Ruhuna University premises was not selected for the holding of Deyata Kirula as there would be obstruction to the main road.
Ministers Dulles Alahappepruma and Lakshman Yapa Abeywardena and Deputy Minister Sanath Jayasuriya were among those who were present at this discussion.
Source - ITN
Deyata Kirula Official Web
www.lankauniversity-news.com
LankaUniversity-News.com Sri Lanka University News at 9:38 AM