Sri Lanka’s major students’ union, Inter University Students’ Federation IUSF “Anthare” says the government is planning to pass the Kotelawala Private University Act, which was defeated in 2018, in another round. IUSF further says that Cabinet approval was obtained for the bill on March 26 and the Kotelawala Bill is scheduled to be discussed in the Consultative Committee of the Ministry of Defense tomorrow June 22. 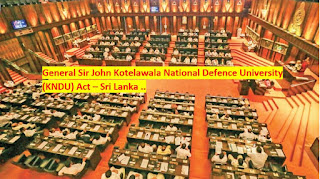 On June 21 , IUSF launched a protest near Colombo Fort Railway Station demanding government to withdraw the proposed Kotelawala Private University Act. A tense situation arose during the protest among police and students.
“The government has launched an attack on a peaceful protest organized by the Inter University Students Federation (IUSF) today against the Kotelawala Act, which is destroying free education to be passed under the guise of an epidemic. The protest continued to be disrupted and assaults, reprimands and threats were made. It is the policy of the government to launch repression instead of responding to the call for rights and all forces must line up against it” says Inter University Student Federation.
Inter University Student Federation is planning to launch several protests coming days against the Kotelawala Private University Act.
University lecturers union, the Federation of University Teachers’ Association (FUTA) is not happy over the proposed bill and says that universities and higher education will be militarized through the Bill. The KNDU Bill was presented to Parliament in March 2021.
Meanwhile National People’s Power (NPP) Parliamentarian Dr. Harini Amarasuriya recently said the proposed Bill will pave the way for militarisation and privatisation of Higher Education in the country. The Parliamentarian said that the proposed Bill will also reduce the standards of the country’s Higher Education Sector.
www.lankauniversity-news.com
LankaUniversity-News.com Sri Lanka University News at 9:47 AM