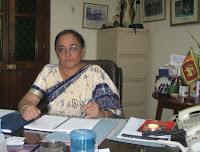 Former Vice Chancellor of the Colombo University Prof. Kshanika Hirimburegama assumed duties as the new Chairperson of the University Grants Commission (UGC). Prof. Hirimburegama succeeds Prof. Gamini Samaranayake as UGC head, and is the eighth to hold the post. She served in the UGC over the past few years and is a specialist on plant tissue culture, having authored some 35 scientific journals, five books and 40 research documents.

At the moment Kshanika Hirimburegama is working the Vice Chancellor of the Colombo University.
She will assume duties as the new head of the UGC when the current UGC Chairman Professor Gamini Samaranayake retires at the end of January. 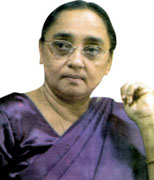 She was born and raised in Colombo and She is the daughter of Nalini Ratnayaka and Dr. Punchi Bandara Sannasgala, an academic researcher on Sinhala language, Sinhala literature, Pali and Sanskrit. He is the author of `Sinhala Saahithya Wanshaya' in the 1960s. She is the fourth out of five daughters born to the Sannasgala family. Her early education was at Visakha Vidyalaya, Colombo.
She entered University of Colombo in 1977 and specialised in Botany. She then entered the Post Graduate Institute of Agriculture (PGIA), Peradeniya and passed out in 1985 with her Masters in Agricultural Sciences. In the same year she left for Belgium to join the Catholic University of Leuven for her PhD. Kshanika married Wijaya Hiriburegama in 1986 whom she met at University of Peradeniya.
She and her husband returned to Sri Lanka in 1989 and joined the Botany Department in Colombo University as a Senior Lecturer in January, 1990. She was later made the Head of the Plant Sciences Department before she was appointed as Vice-chancellor in January, 2008.
LankaUniversity-News.com Sri Lanka University News at 11:42 AM