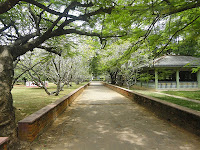 The University of Sri Jayewardenepura has fast become a torture camp and is unsuitable for academic purposes as the university's Vice Chancellor continues to work against undergraduates, student unions alleged yesterday.
In an ever-rising crackdown against student activists, the university has suspended 15 more students this week, for having participated in a protest on Wednesday, 19 June.

The Inter University Students' Federation (IUSF), charged that 71 undergraduates of the Jayewardenepura University have been suspended within a mere three-week period.
IUSF Convener, Sanjeewa Bandara, claimed the students' right to protest is being violated, as the undergraduates did not behave in a violent manner bringing disrepute to the university.

He said suspensions would not resolve the crisis, which has prevailed within the university over the last four years, and which incidentally is the main cause for the students to agitate.
"Students have been protesting because they don't have adequate facilities. Hostels don't have water, students with financial difficulties don't receive Mahapola Scholarships on time, and they don't have enough amenities to study in peace. When they protest against these issues, they're suspended, citing flimsy reasons.

It's a pathetic situation as students don't have the freedom to do anything without risking being kicked out," Bandara said.

The 15 students were suspended for protesting against the admission of several undergraduates to the Medical Faculty as private candidates.
The undergraduates were therefore agitating against the government's possible move towards the privatization of State Universities, which may be initiated by the 'selling of degrees' to certain students.

The Chairman of the Sri Lanka Independent Student Union Giyan Bandara Dissanayake said that what has happened in the Sri Jayawardenapura University is a political conspiracy. The objective of this conspiracy is to lure the first year students to the extremist groups. He alleged that student groups affiliated to the Janatha Vimukthi Peramuna and the Frontline Socialist Party are behind this conspiracy. The objective of these groups is to revive ragging in the universities. Mr. Giyan emphasized that using first year students for political agitations cannot be accepted under any circumstances.

The student union has requested the university administration to take stern action against these activities. The Chairman of the Independent Students Union Yukthi Ekadheera said that the Vice Chancellor of the Jayawardenapura University should take all actions necessary to eliminate ragging in the university and bring it to normal condition. He said that extremist groups are attempting to shatter the peaceful situation in the university and to use the new students for their petty political objectives. Meanwhile, the Chairman of the University Grants Commission Professor Kshanika Hirimburegama said it is essential to maintain discipline within the university network. She said that the university administration is empowered to take action against the wrongdoers.
She said that it is only a minority group that attempts to disrupt university activities and their objective is to deny the free education opportunities. The administration council of the Sri Jayawardenapura University has taken steps to suspend classes for 40 students who have been identified as involved in ragging. It is reported that the suspended students who belong to a certain political party are attempting to force the university students to stage demonstrations against the suspension of classes for identified students.
Extract from Ceylon Today & SLBC
LankaUniversity-News.com Sri Lanka University News at 12:28 AM