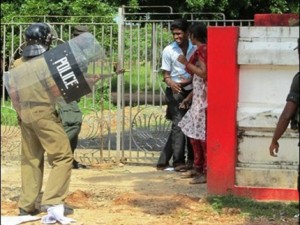 National and international condemnation has followed the injuring during a clash with police of dozens of students at Jaffna University. This, along with the arrest of four students, sparked a wave of protests that has hit Tamil-dominated northern Sri Lanka in recent weeks.

The trouble has attracted international attention. Media reported that British Tamils had demanded the immediate release of the students, and Norwegian Tamil youth held a peaceful demonstration on Tuesday with lights and banners. In Canada, Tamil students reportedly also staged protests on 4 December at universities including York, Carlton, Raizan, Toronto and Garland.

This article Extracted From www.UniversityworldNews.com

Amnesty International called for urgent action on behalf of the arrested students, who it said were being held in Vavuniya for interrogation and were at risk of being tortured.

The US embassy in Colombo also expressed concern and called on the authorities to exercise restraint and to respect peaceful demonstrations.

Tamil political parties, several civil society organisations and parents held a massive protest on Tuesday in Jaffna town to condemn the harsh police action against the student protest march, and to call for the release of the students.

Security forces have sought to suppress the most intense political strife since civil war ended three years ago. The students were reportedly arrested on 30 November in connection with a bomb attack on a political party office in Jaffna peninsula.

According to sources, police have sent a list of 'wanted' students to Jaffna University officials demanding that 10 students be handed over for further investigation.

The protest wave began on 28 November, when the police used force to disperse a protest organised by Jaffna students. The students accused police of attacking them, while the police said students had thrown stones at officers.

Lecturers and students at the university have been boycotting classes since then, and academic activities have ground to a halt.

The authorities tightened security in and outside Jaffna University, which is the city’s only public university. Established in 1974 the institution, 350 kilometres from the Sri Lankan capital Colombo, has 6,000 students in nine faculties.

The Inter University Students’ Federation (IUSF), the major student union in Sri Lanka, condemned the police action. It has staged several protests and has warned of more demonstrations to safeguard students’ rights.

The police had damaged hostel property, “threatening students and pointing weapons at them”. Heroes Day (Maaveerar Naal) lamp-lighting ceremonies are in remembrance of the Liberation Tigers of Tamil Eelam (LTTE), the banned armed resistance group.

Bandara added: “The next day students organised a protest march and held placards condemning the brutal attacks. During the time of peaceful protest, military and police carried out attack against the students.

“More than 50 students were injured and 10 hospitalised, and currently three are receiving treatment at the hospital.”

The Federation of University Teachers Associations also slammed the assault and said the government had no right to interfere with the ideologies of students.

Issuing a special statement, government medical officers in Jaffna urged the release of the students and stated that they had decided to support the protest campaign.

One of the students was released on bail on Tuesday but the three others remain incarcerated while the Terrorist Investigation Division questions them.

The military commander of Jaffna, Major-General Mahinda Hathurusinghe, told the BBC that students had been told they should not march because “they would become violent” and that Heroes Day should not be observed “for the betterment of the country".

Subsequently, the military agreed to withdraw army and police personnel from the Jaffna University compound. However, by Thursday police remained on campus.

One student anonymously confirmed to University World News that students had held a lamp-lighting ceremony for Heroes Day at the hostel. The student said that LTTE activities were under way at Jaffna University.