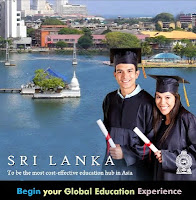 The Sri Lankan Government’s main target is to meet the target of making Sri Lanka the Asia’s Knowledge Hub by the year 2020. Sri Lankan President Mahinda Rajapaksa made this reference joining in a discussion held at the Higher Education Ministry on the manner in which the 2013/2015 medium term should be implemented based on the Mahinda Chinthana policy.
Attention was drawn to at this discussion with regard to the inclusion of topics which are of significance to the present era. The President took the initiative of finding on the spot solutions to problems experienced in this field. The President said that research of University lecturers beneficial to the country should be made use of via various Government institutions.
The President said that there are 17 Universities and 41 Research Institutes. This should be affiliated to national development. As an example the President recalled how a University lecturer told him of the success they had achieved in a research conducted at the Coconut Research Institute, for the insect that was harming coconut trees and that there was no need to cut down the affected tree, but it was not been used by the institutes. This he attributed to the links that are not being maintained by the two sides. An initiative should be taken to have some coordination between the Universities and development.
Universities in Sri Lanka have been upgraded in world rankings. The President emphasized that this should be further enhanced. It was underscored at this discussion that in addition to the establishment of University villages, concepts such as building knowledge towns should be put into action. The President issued instructions to further improve facilities in Universities.
The President also launched the new websites of the Higher Education Ministry and also introduced the hotline 1918 of the Education Ministry.
President Rajapaksa said allocations for higher education and the uplift of the universities should be utilised properly. "Academic staff should be provided the latest knowledge. Universities should be converted to research and experiment centres. Then only the university education links with the ever - changing and advancing world," he said.
President Rajapaksa told the authorities to take measures to solve drinking water and hostel issues at universities. A graduate should be job - oriented and equipped to take up any challenge in the competitive environment, the President said.
He said a graduate should be a person of quality, equipped with multiple skills and capable of taking the country forward.
He said there should be a link between universities and other institutions engaged in research and development. "The academic staff should also be dedicated to create a capable student community enriched with knowledge and skills. Universities and academic staff are path finders to the modern world," the President said.
He said modern undergraduate courses should be introduced to the university system with immediate effect including petroleum technology, space science, aeronautical engineering, robotic etc.
LankaUniversity-News.com Sri Lanka University News at 5:01 PM